The West Wall
Our tour of OP de Hart starts on the west wall. Let me christen the ground starting from the left and working to the right. We'll take a look at each of the artifacts and collectibles that we have on display, while I try to give you some of their background history. Mind you, I'm not too sure on much of the history myself, so I'm looking for some assistance from the membership. Here goes .... 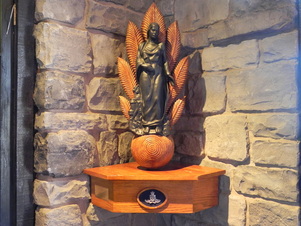 Saint Barbara
Our first picture is of our patron saint, Saint Barbara. This beautiful rendering was presented to OP de Hart by LCol (Retd) J.J. Donahue, President, Ottawa Gunners, 1992.
I believe the statue of Saint Barbara came to reside in our Mess due to the action of our own Lieutenant-Colonel Jerry Donahue. The story, as far as I can recall, is that one of the Military Attaches' in Ottawa, decided that the figure needed a better home than the one that he could provide. Jerry was quick enough to seize the opportunity and we ended up with a beautiful rendition of our Lady ...
Looking forward to Jerry providing me with the real story..... 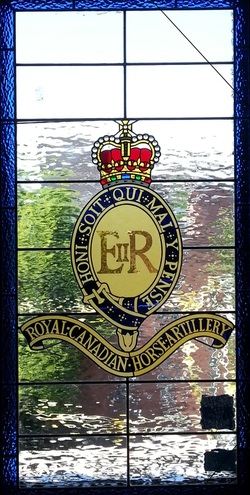 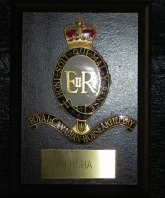 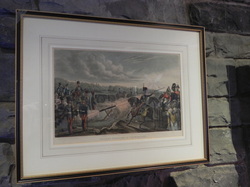 Rocket Practice in the Marshes
The Warwick Leadlay Gallery features copies of this print and has the following description: "The image shows Royal Artillery war rocket practice using a rocket launcher mounted on a tripod. It was during the fourth Anglo-Mysore war (1798-99) that Indian troops under Tipu Sultan of Mysore (1750-1799) together with his father, Hyder Ali, developed the tactic of using rocket brigades to launch mass attacks on infantry formations. These rocket attacks, used during both the third and fourth Anglo-Mysore wars, so impressed the British forces that they brought several examples of Indian gunpowder rockets back to England; these provided William Congreve (1772-1828) with the inspiration to develop his own system of war rockets. By the time this print was published they had reached a quite sophisticated level. The donor and the reason for the donation are unknown at this time. 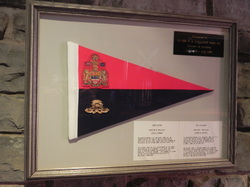 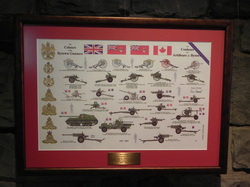 The Colours of the Bytown Gunners
Presented to Ottawa Gunners Association. celebrating the 150th anniversary of the 2nd Ottawa Field Battery. Royal Canadian Artillery. 1855 - 2005. It provides a representation of each of the guns that the unit has been equipped with throughout its history. From the 6 Pounder 58ML gun during the days of the Volunteer Militia Field Battery of Ottawa to the 105mm C3 howitzer of the present day unit. 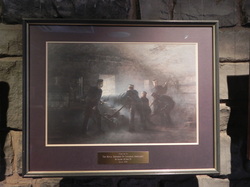 Garrison Artillery
Presented to the Royal Regiment of Canadian Artillery by Major JB Dick, CD in June 1986. The print was purchased from the Citadel in Halifax in 1982 and is believed to depict Royal Artillery gunners practicing gun drill during the last half of the nineteenth century.  There is also the possibility that they could be Canadian Gunners from the 1st and 2nd Brigades of Halifax Garrison Artillery who often trained in the Citadel. 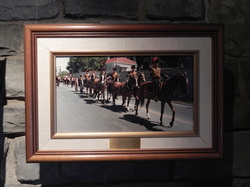 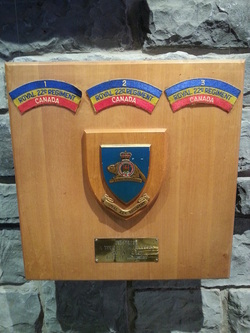 Royal 22e Regiment
The Royal Regiment of Canadian Artillery has a long and proud history of supporting our Infantry Battalions with the requisite amount of firepower delivered in an accurate and timely manner. That history has provided opportunities wherein our Infantry brethren have felt grateful for the delivery of that support when it was absolutely needed as part of the Defensive Fire Plan. The Royal 22e Regiment has been one of those regiments and they have presented this plaque in appreciation of that relationship. Presente a tous les artilleurs qui ont servi avec le Regiment 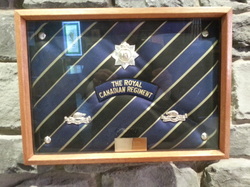 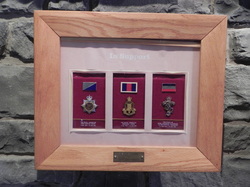 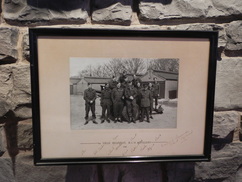