The Bar Gong
You're probably getting quite thirsty by now, if you've been following the OP tour on your smart phone as you wander around the room. Now would be the opportune time to step up to the bar and order a libation. If it's the third Friday of the month, it would be an opportune time to "Ring the Gong" and treat your fellow Gunners to one as well!
Question for the readership: Where did the Bar Gong tradition start? Are there any historic references? 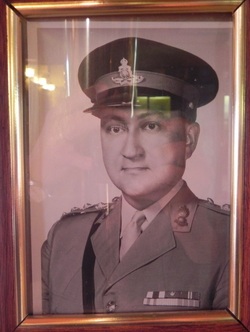 Award of the Military Cross
ZM 2699 Captain John Edward de Hart 81 Canadian Field Regiment
Captain de Hart during his service with 81st Canadian Field Regiment Royal Canadian Artillery (RCA) and while attached to 1st Regiment Royal Canadian Horse Artillery (1RCHA) has successfully manned exposed Artillery Observation Post for long periods and frequently under intensive enemy fire and at all times providing the Infantry with support to their satisfaction. During the period 16 to 28 March 1953, a Company of the Royal Netherlands Battalion, 2 United States Division which he was supporting was occupying a position known as “NUDAE” and became subjected to heavy chinese attacks, preceded by intense bombardments. The main enemy efforts were made during the night 16/17 March and 28/29 March 1953. Throughout this time Captain de Hart occupied an Artillery Observation Post and directed artillery in support of the Royal Netherlands Battalion. During the event, the company occupying “NUDAE” was relieved by another company of the Royal Netherlands Battalion, but Captain de Hart remained as the Artillery representative throughout the period. On the night 16/17 March 1953, at 2215 hours, fifty to sixty enemy attacked and again at 0200 hours a further fifty to sixty enemy launched another attack. In neither case did they penetrate our defences. Our own casualties were light, whereas enemy casualties caused by Artillery Fire directed by Captain de Hart were heavy. On the night of 17/18 March 1953, at 0200 hours, a large ambush inflicted heavy casualties on our own troops. The position was heavily shelled and mortared and the Company Commander was killed. Again, in spite of the enemy shelling, Captain de Hart directed Artillery Fire with outstanding success. On the night 28/29 March 1953, at 2200 hours an intense enemy bombardment commenced and at 2230 hours an attack by two or three hundred enemy was launched. For one-half hour the only communications were those of the artillery, which were maintained in spite of two direct hits on the Observation post. Captain de Hart coolly directed Artillery Fire, and the attack was driven off with enemy casualties officially estimated as fifty killed and seventy-five wounded.
During this entire period several hundred rounds of enemy fire fell daily on the “NUDAE” feature. During the intense bombardment prior to the attacks and during the attacks themselves, Captain de Hart directed Artillery Fire, maintained communications and passed information with such steadiness and with such disregard for his personal safety that he made a magnificent contribution in the successful defence of the position. His conduct in these trying circumstances, and in the light of language difficulties, was  an inspiration to all those intimately concerned with the battles.
Artillery Unit Crests 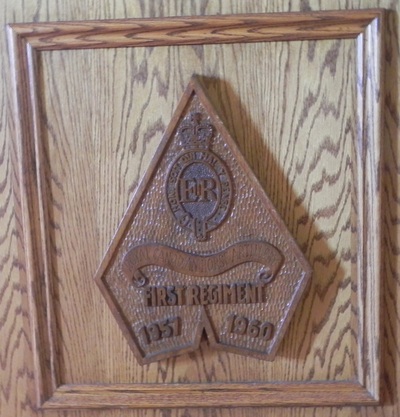 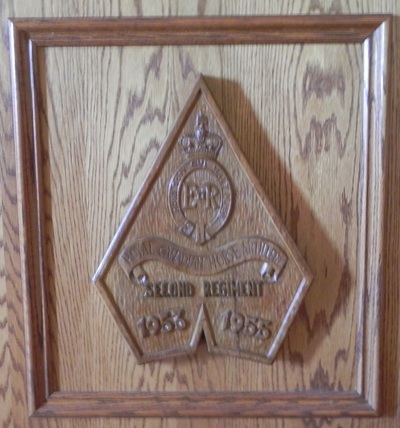 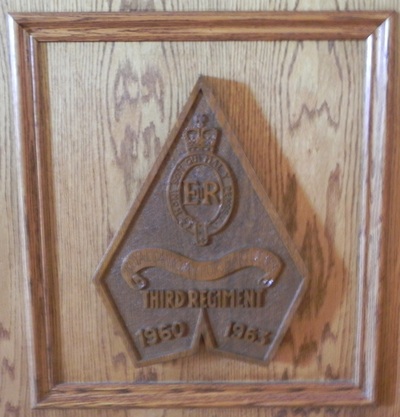 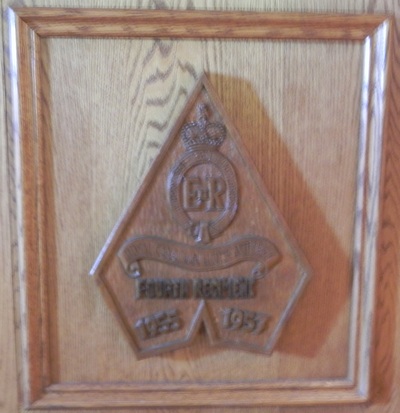 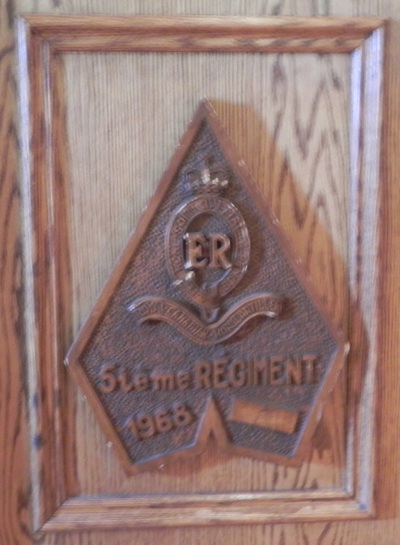 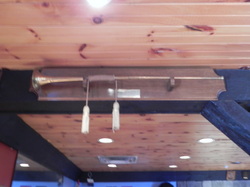 Post Horn
On the beam running on the west side of the bar, we have a musical instrument, a post horn that was presented by Major DG Schott RCA.
Thanks to Bob Gunn, I now know that this is a is a valveless cylindrical brass or copper instrument with cupped mouthpiece. Often circular, and a symbol of the postal service, there were also ones that were straight.
As a demonstration of the sound of the instrument, I've found a video clip of the Royal Artillery playing the Post Horn Gallop during a parade on Red Square in Moscow. Check it out at the 3:00 minute mark. Don't mind the Russian announcers. 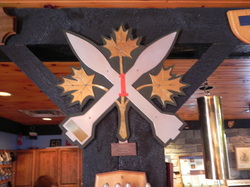 1 Surface to Surface Missile Battery Royal Canadian Artillery
Presented to the Artillery Officers in the CFHQ by 1SSM Battery RCA on disbandment 1 July 1970. A few things have changed in the establishment of the Canadian Forces since those days. CFHQ (Canadian Forces Headquarters) has changed to the National Defence Headquarters and the Honest John missile system that 1 SSM Battery was equipped with, have ceased to be a part of our inventory. 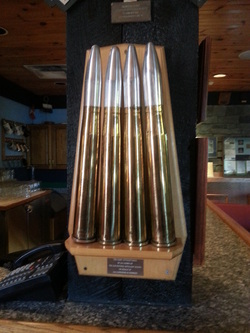 Leather Artillery Combat Jerkin Vest
Hanging at the back of the bar we have a Second World War Artillery leather vest. I'm looking for some more information on it because, honestly, I may have signed up a long time ago but, there was any leather vest on my kit issue. Puttees, yes. Blanket strap left and right and midnight blue beret. But, I'm sure there wasn't any leather vests.

John Dick did some “quick and superficial research” on the leather vest in the OP and came up with the illustration from "The Canadian Soldier in North-West Europe, 1944-1945" by Jean Bouchery (Histoire and Collections, Paris, 2003) on page 91.
It is officially called a "Jerkin, leather" and is listed in the Priced Scale of Issue of Clothing issued for the Canadian Army Overseas in 1942.  The entitlement was, "(Winter months only) One each motorcyclist and each pillion rider and side car passenger authorized by W.E.  One each driver of mechanically propelled vehicle."  This was later amended by adding authorization for "two each Armoured Fighting Vehicle."
The entitlement may have been further amended after 1942 and Canadian Army Routine Orders would have be checked to find out.  As you probably know W.E. stands for war establishment.  It does not appear in the Scales of Issue for Canadian based units, at least not that I could easily find and again CAROs would have to be checked.  I do not know if it was issued to the post-war Army but there must be a regulation somewhere that either confirms or denies its existence.
On a personal note, John remembers his father telling him it was a great piece of kit and the only one he wished had kept when demobilized in 1945.

Thanks for the information, John!
Carved Unit Crests 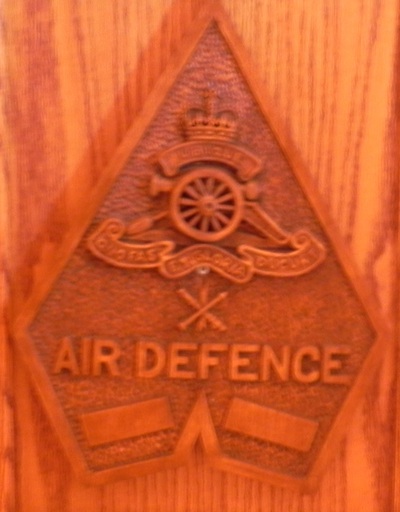 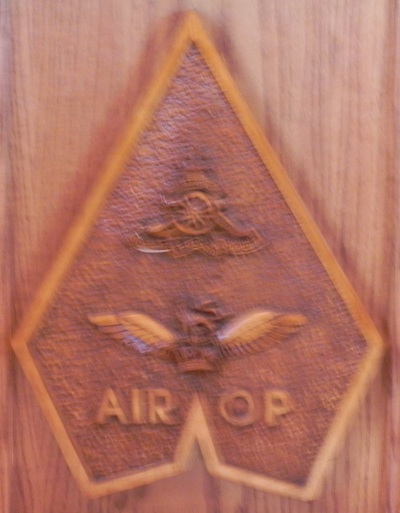 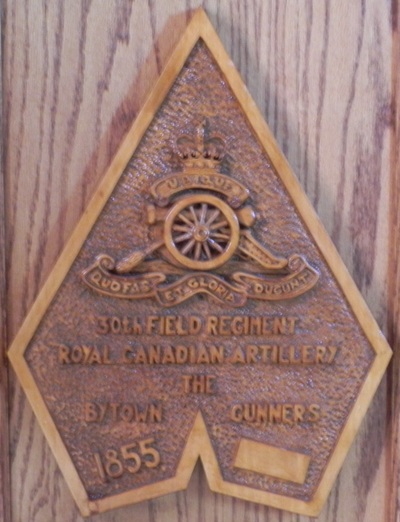 It appears that there were not a sufficient quantity of crests to complete the bar and the original crests were complemented with the addition of these. The units include Air Defence, Air OP and 30th Field Artillery Regiment, RCA. 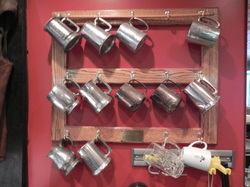 Beer Mug Rack
Is there a better name? We have a pair of racks for the storage of beer mugs. This rack was presented to the OP deHart by Lieutenant-General W.A.B. Anderson OBE, CD on 26 May 1995. It holds an eclectic collection, including a riding crop and beer mugs as follows:
Second Regiment RCHA T Battery MET Officer - Lt McLeod and Lt Fancy - Date unknown
Capt Jack Dehart mug presented by the YO'S Tour May 1958
Second Regiment RCHA, F Bty CPO Mug - There's a lot of names on this one, Lt GR Simonds, Tattersall, Johnstone ...
Third Regiment, TC A Tp mug - I see a Lt Learmonth and a Capt Learmonth on this one. Plus a lot of other names.
More details to follow